REMEMBERING TERESA LEAL; a founding member of Border Patrol Victims Network and a fighter for social justice her entire life 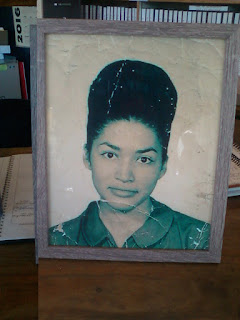 A photo of a young Teresa Leal on her desk at the Pimeria Alta Historical Society museum in Nogales, Arizona.


This video shows some of Teresa Leal's involvement with the Border Patrol Victims Network since its' founding in 2014 until her death May 1, 2016. Teresa will be sorely missed.
TERESA LEAL, PRESENTE!

LEAL MADE HER MARK (May 10 letter in Nogales International from BPVN volunteer Richard Boren)
First thanks to Murphy Woodhouse and the Nogales International for the fine article printed the same day we all found out about Teresa Leal’s passing (“Local historian and activist Teresa Leal found dead at museum,” posted May 3). It helped soften the overwhelming shock we felt upon hearing the news only hours earlier.
On April 29 Teresa took part in the “Border Seder” which was performed on both sides of the Nogales border wall. She seemed as vibrant as ever.

Teresa chose to participate on the Mexican side and she sat only inches from the steel barrier. This event that used a beautiful Jewish ceremony to reflect on the suffering caused by the border turned out to be the final collective action of her life. She sat with the family of José Antonio Elena Rodriguez, who was killed by a Border Patrol agent within sight of where we sat. Teresa translated their words into English.
The impact of Teresa’s life transcended the border that during her life changed from an imaginary line in the sand to resembling the Berlin Wall. Teresa struggled for justice on both sides of the border. She went out as she would have wanted, “en la lucha.” Her passing creates a tremendous void that will be difficult to fill. In Nogales she embodied “the movement.”
Teresa was also one of the most hospitable and generous people I’ve ever met. Her house was always available, with no notice, to those needing shelter. She collected donations like medical supplies to distribute to the needy. During my visits to the museum people she had helped would drop by to say hello. One man who had gone through hard times called her “mom.”
The museum of the Pimeria Alta Historical Society is an enormous legacy to her wonderful life. I encourage all to give a donation to help keep it going. Without Teresa’s selfless devotion the museum might have closed its doors long ago. It wasn’t for money that she did it or did anything else for that matter, as she hardly earned any money at all. For her the work at the museum and in the community at large were a labor of love.
Teresa Leal, presente!
Richard Boren
Border Patrol Victims Network,
Tucson
SEND DONATIONS TO:
Pimeria Alta Historical Society and Museum
136 N. Grand Avenue; Nogales, AZ 85621 call: 520-287-4621

A video made the day of Teresa's funeral when families and friends gathered at her magical house to reflect on her wonderful life, put to the music of Silvio Rodriguez's song (Días y Flores)

Posted by Richard Boren at 5:13 PM