THE BORDER PATROL VICTIMS NETWORK (BPVN) IS A NETWORK OF FAMILIES OF VICTIMS, VICTIMS, AND VOLUNTEERS UNITED IN THE STRUGGLE FOR JUSTICE AND TO END IMPUNITY FOR BORDER AGENTS 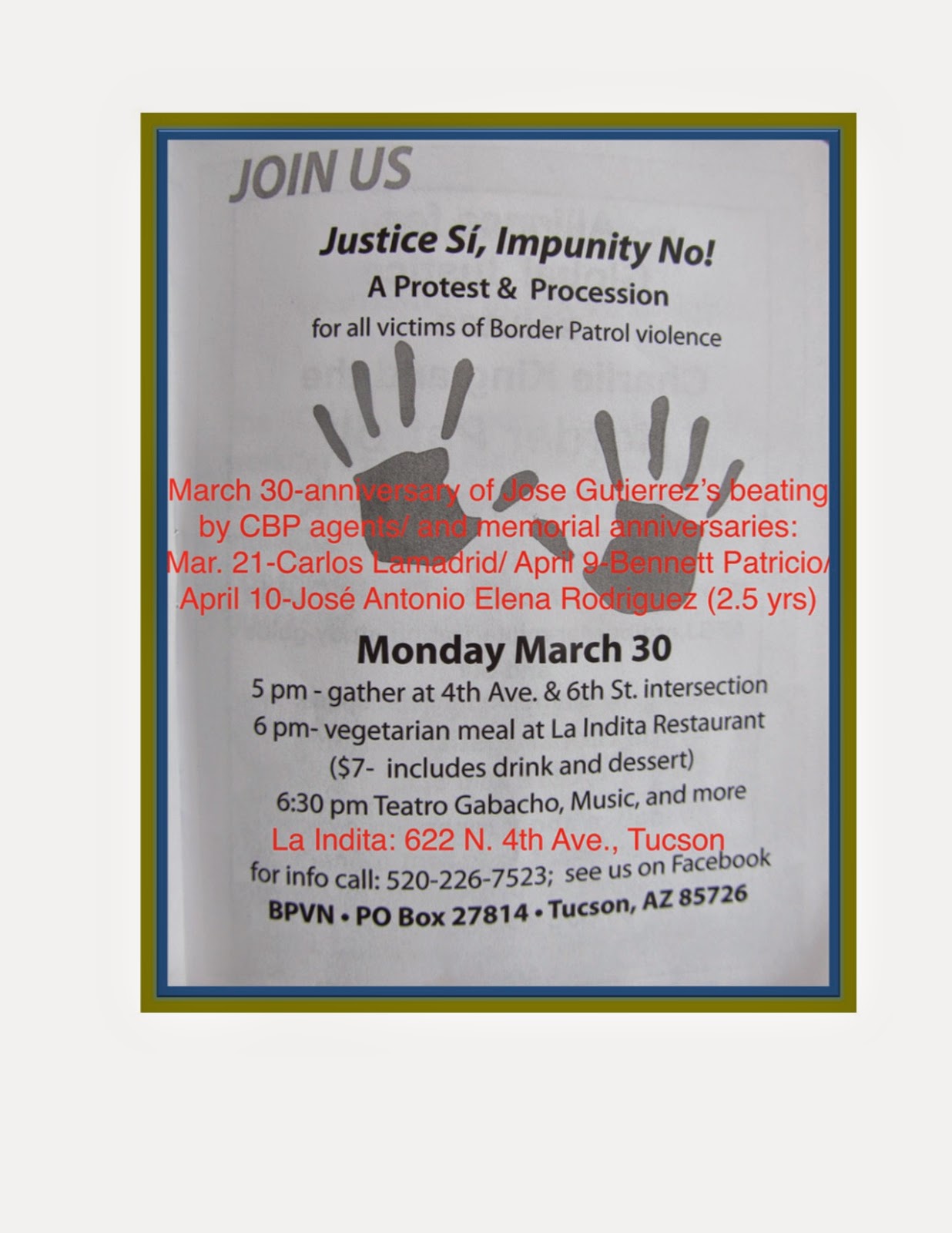 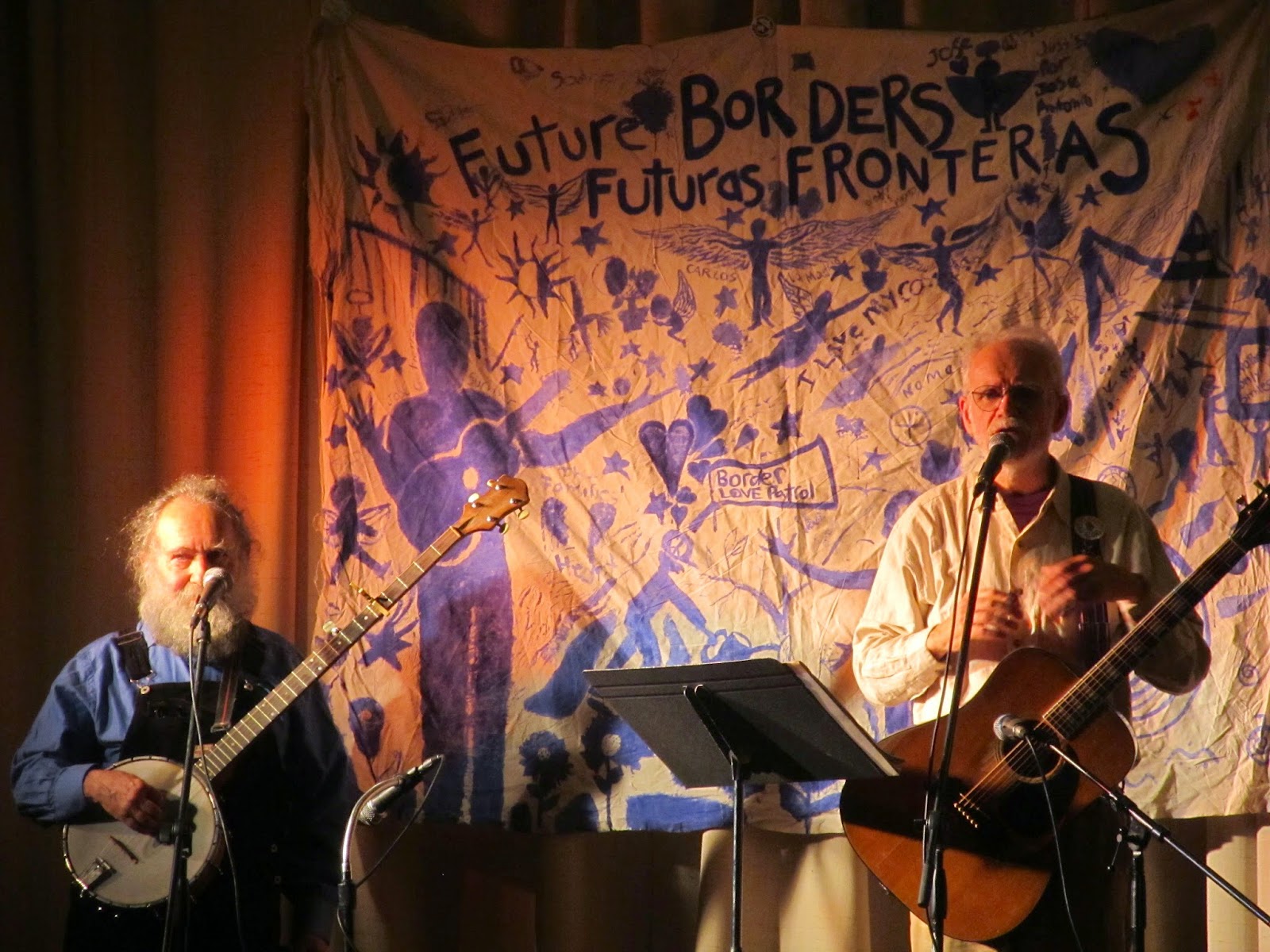 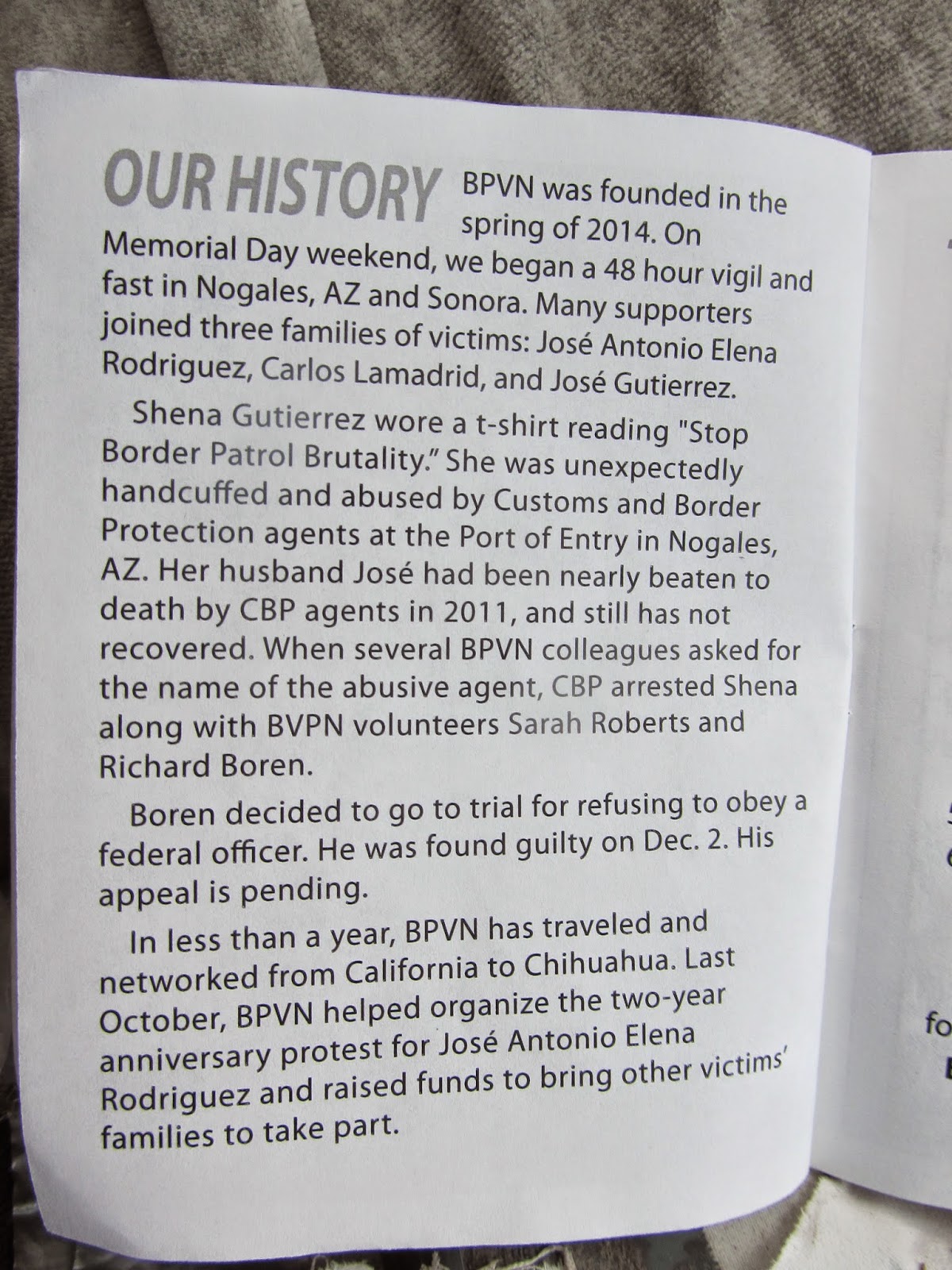 FEB. 2015: A bit of justice for one victim who was shot by a Border Patrol Agent and survived. Thanks to a civil lawsuit.


DEC. 2, 2014-BPVN Volunteer Loses Round In Court (from arrests last May at 48 Hour Vigil/Fast in Nogales) but gets to cross examine agents who arrested him: Appeal Pending 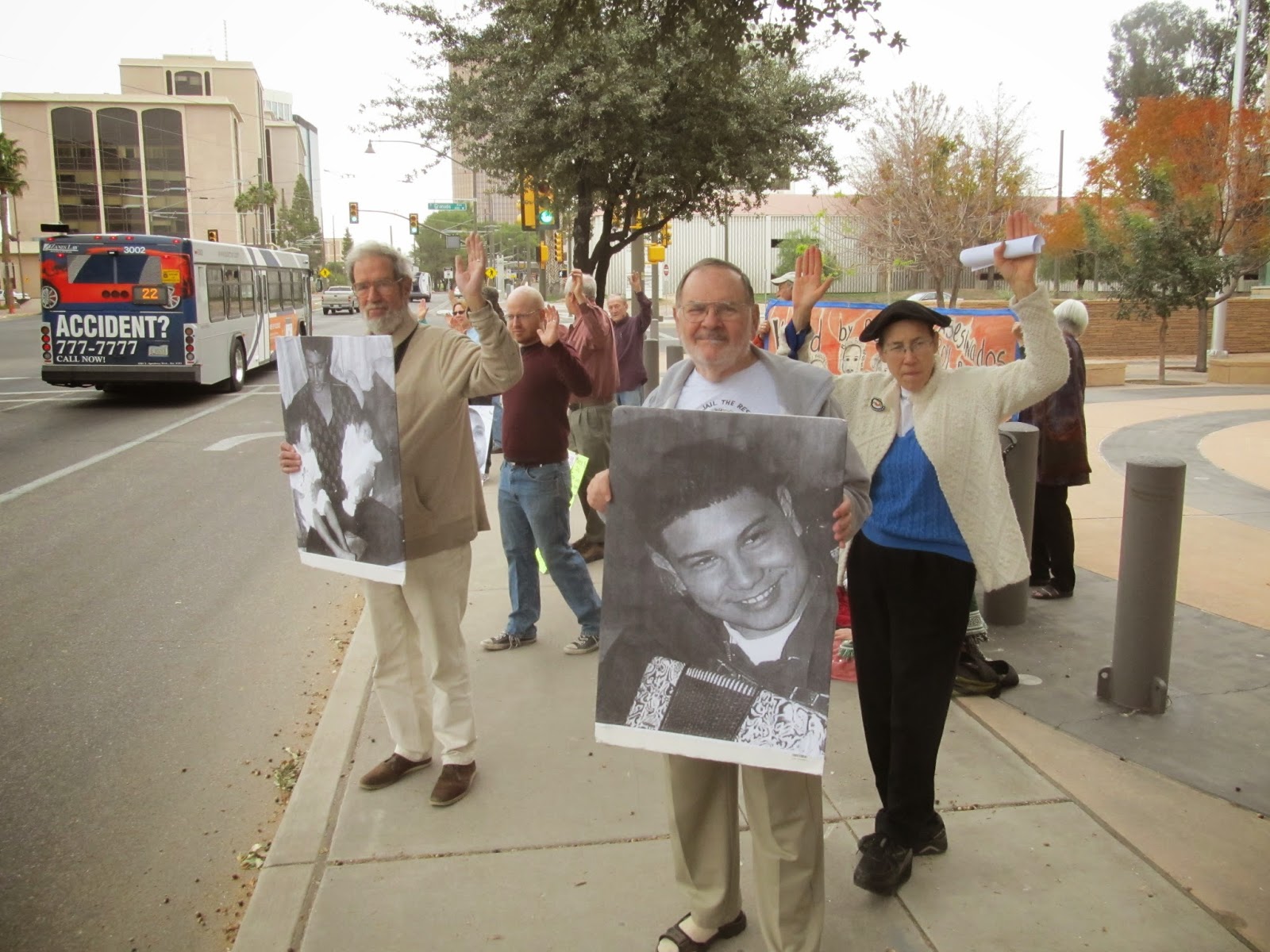 The Dec. 2 gathering outside the federal courthouse in Tucson. "Hands Up, Don't shoot!" in solidarity with Ferguson and other anti-police brutality movements. 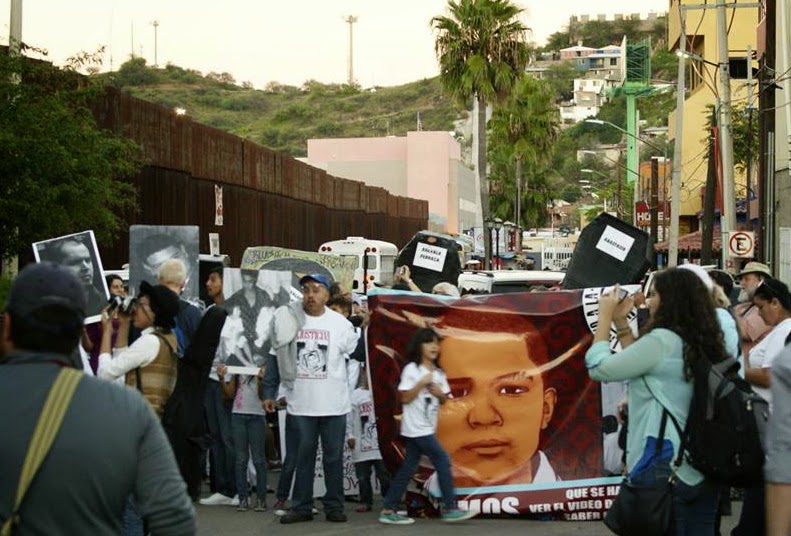 Videos showing the day's activities for justice for of Border Patrol victims.  Above "The U.S. Border Patrol: "Honor First?"; or Taking The Law Into Their Own Hands." The video below with Spanish titles.

Re: the Sept. 11 article “Border agent cleared in May killing.”
The decision by the Pima County Attorney’s Office to clear Border Patrol agent Daniel Marquez of any wrongdoing in the shooting death of Jose Arambula is questionable jurisprudence but has its positives.

By concluding that a “jury in a criminal trial would most likely find Agent Marquez’s actions were justified,” a lengthy jury trial is avoided and taxpayer money saved. The whole case seems to be focused on Arambula’s “apparent attempt to use deadly physical force.”
However, Arambula was unarmed and was shot “in the back of the head.” A jury would surely waste valuable time debating this troubling aspect. So case closed based solely on the “unbiased” Border Patrol’s version of events. Who needs those pesky juries anyway?
The Border Patrol has acknowledged the problem of agents using excessive lethal force at times. Unfortunately, the Pima County Attorney’s Office became an enabler of this problem by clearing agent Marquez.
Ana Maria Vasquez


AUG. 6, 2014--SHENA GUTIERREZ AND TWO OTHER BPVN ACTIVISTS FACE CHARGES IN FEDERAL COURT FOR MAY ARREST BY CUSTOMS AND BORDER PROTECTION AGENTS IN NOGALES, AZ 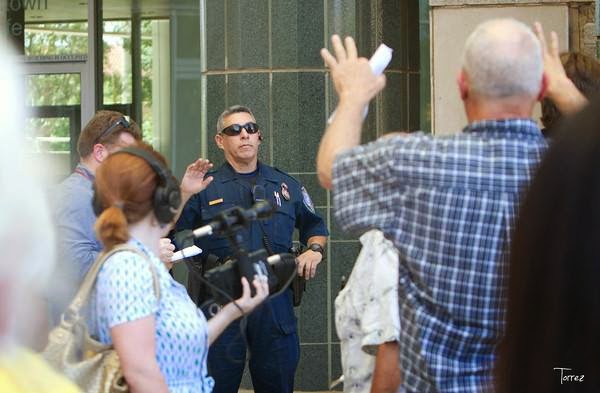 A highly ironic moment.  Federal
officer Joe Orozco, the same officer
who arrested the three activists in
Nogales on May 24, shown here
ordering the press conference
participants off the grounds of
the federal courthouse claiming
it was a "demonstration". 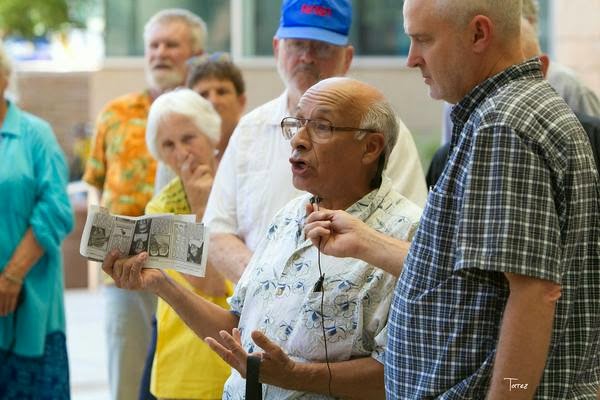 (left) Eduardo Silva speaking to the media. His grandson, Jose Arambula, was slain by the Border Patrol in May, 2014 in Green Valley, AZ.

Video--Araceli Rodriguez and Jaime Millan at the vigil for child migrants in Nogales, Sonora. Video also includes news coverage of the event. 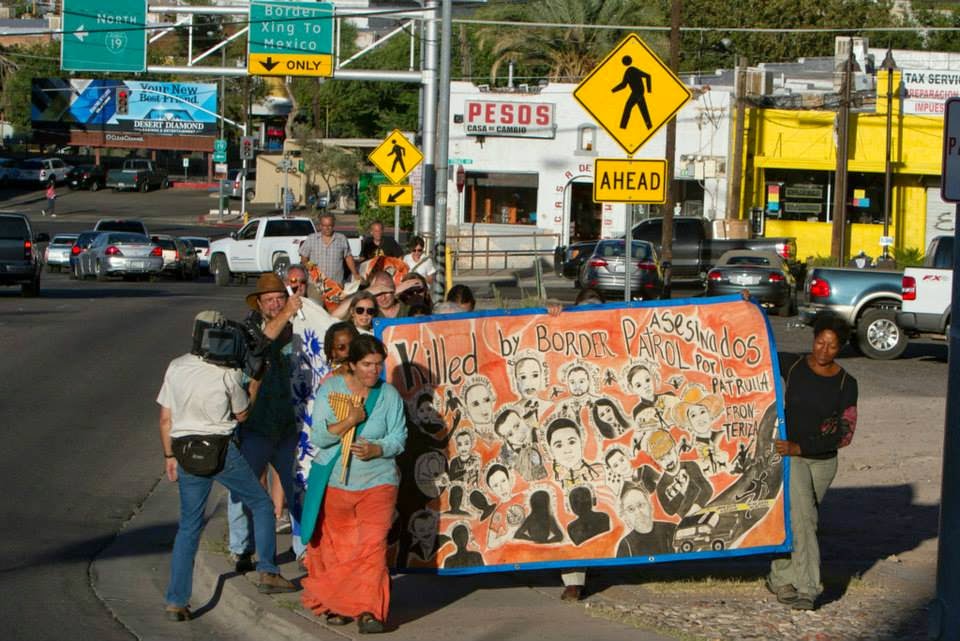 May 28, 2014--4 YR. ANNIVERSARY OF MURDER OF ANASTASIO HERNANDEZ ROJAS BY BORDER PATROL AGENTS--EVENTS IN SAN YSIDRO AND SAN DIEGO, CA.--4 YRS. WITHOUT JUSTICE. 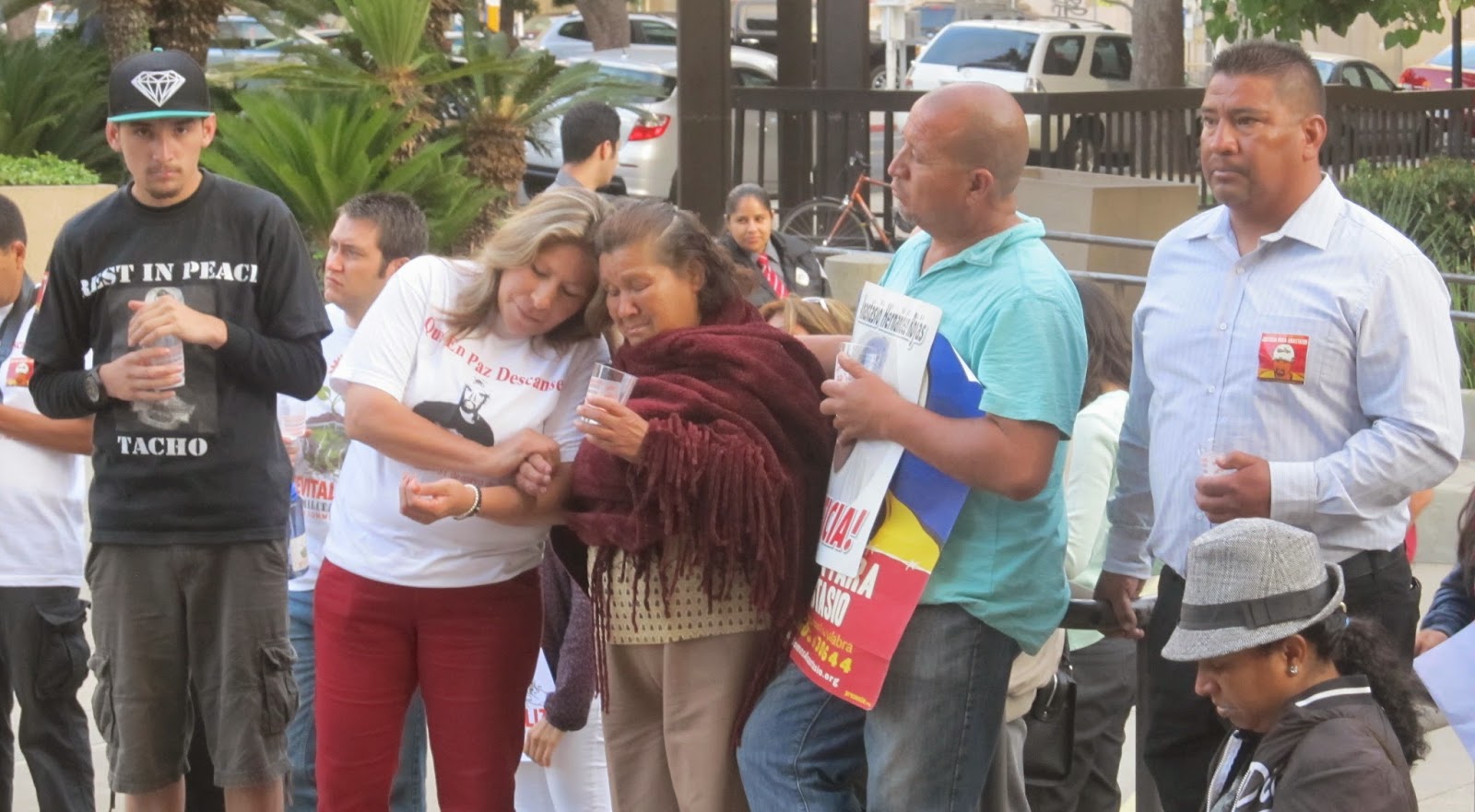 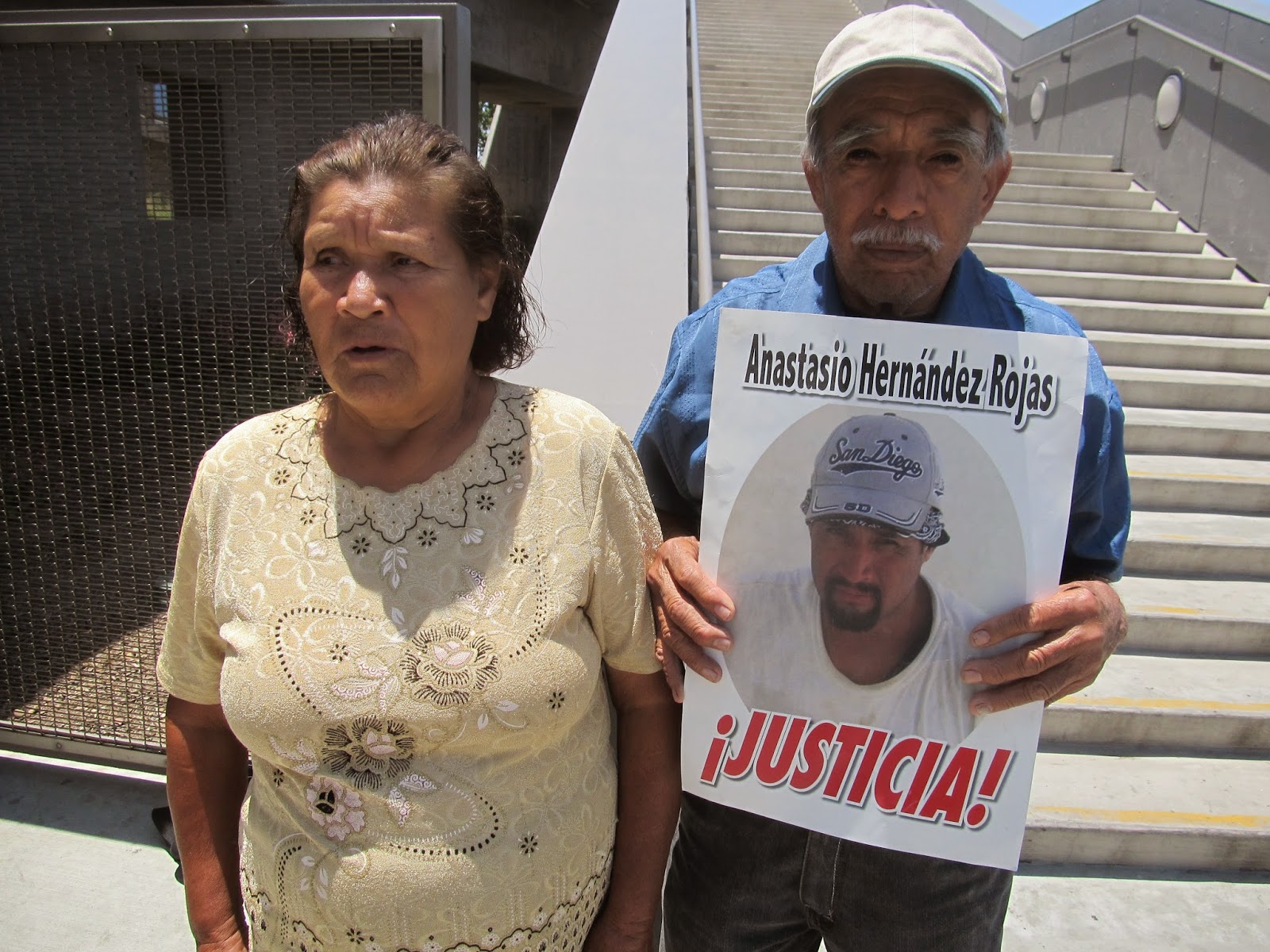 MAY 23-25;  48 HOUR VIGIL-FAST FOR ALL VICTIMS OF THE US BORDER PATROL; NOGALES, AZ AND SONORA
ON MAY 24 SHENA GUTIERREZ, ONE OF BPVN'S FOUNDERS, ARBITRARILY ARRESTED WITH TWO BPVN VOLUNTEERS FOR DEMANDING THE NAME OF CUSTOMS AND BORDER PROTECTION AGENT WHO ABUSED HER EARLIER THAT DAY. 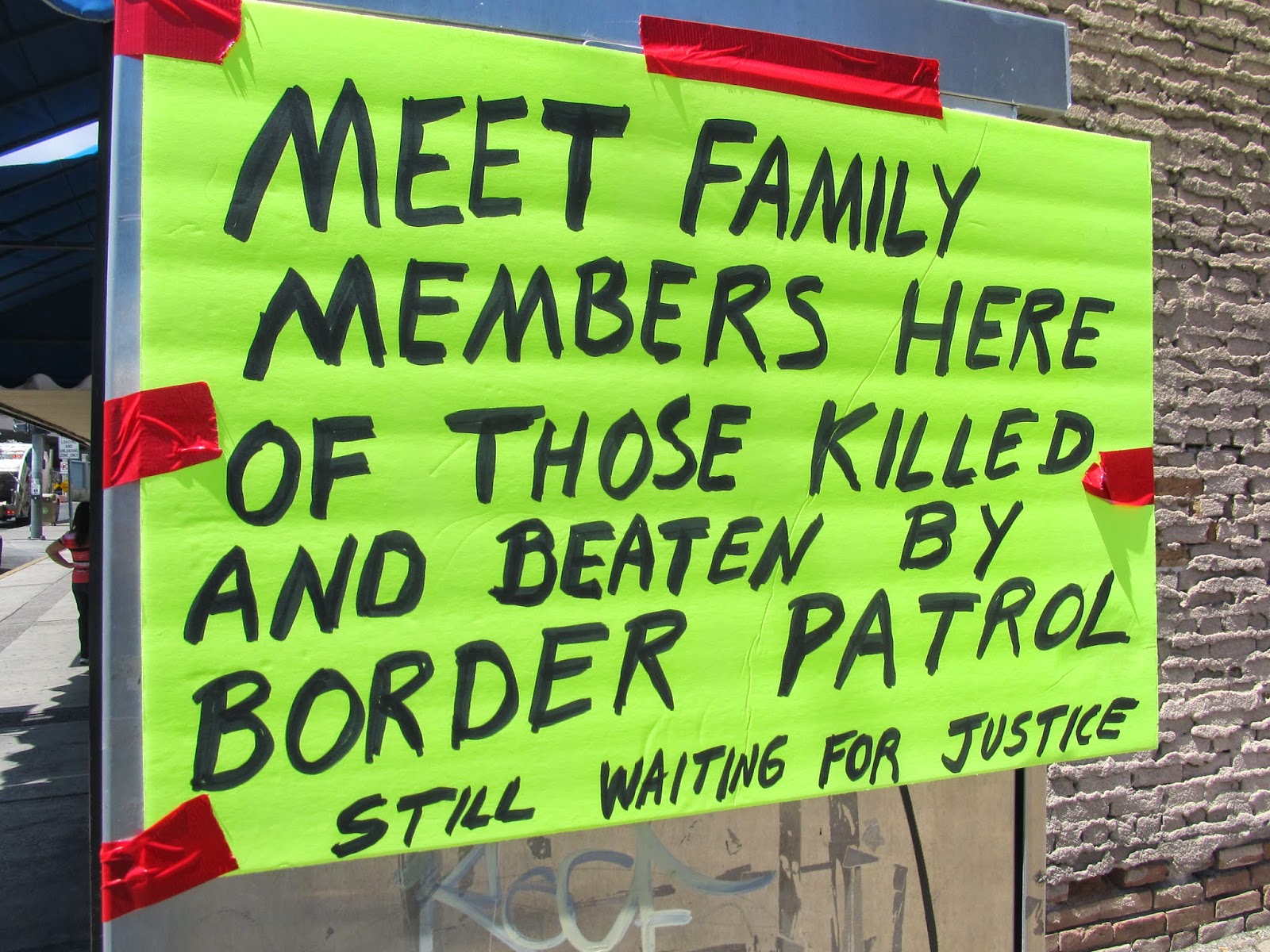 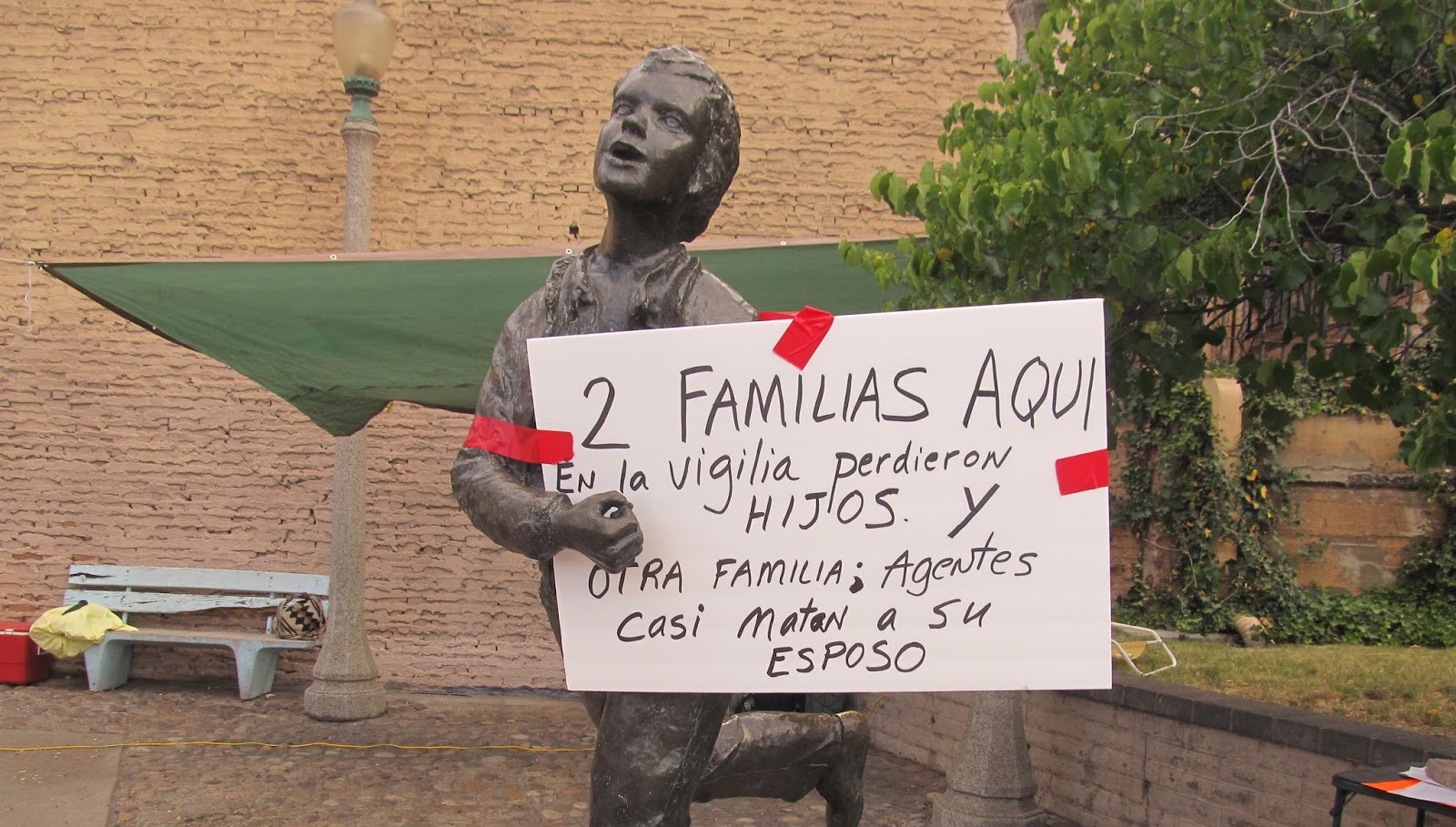 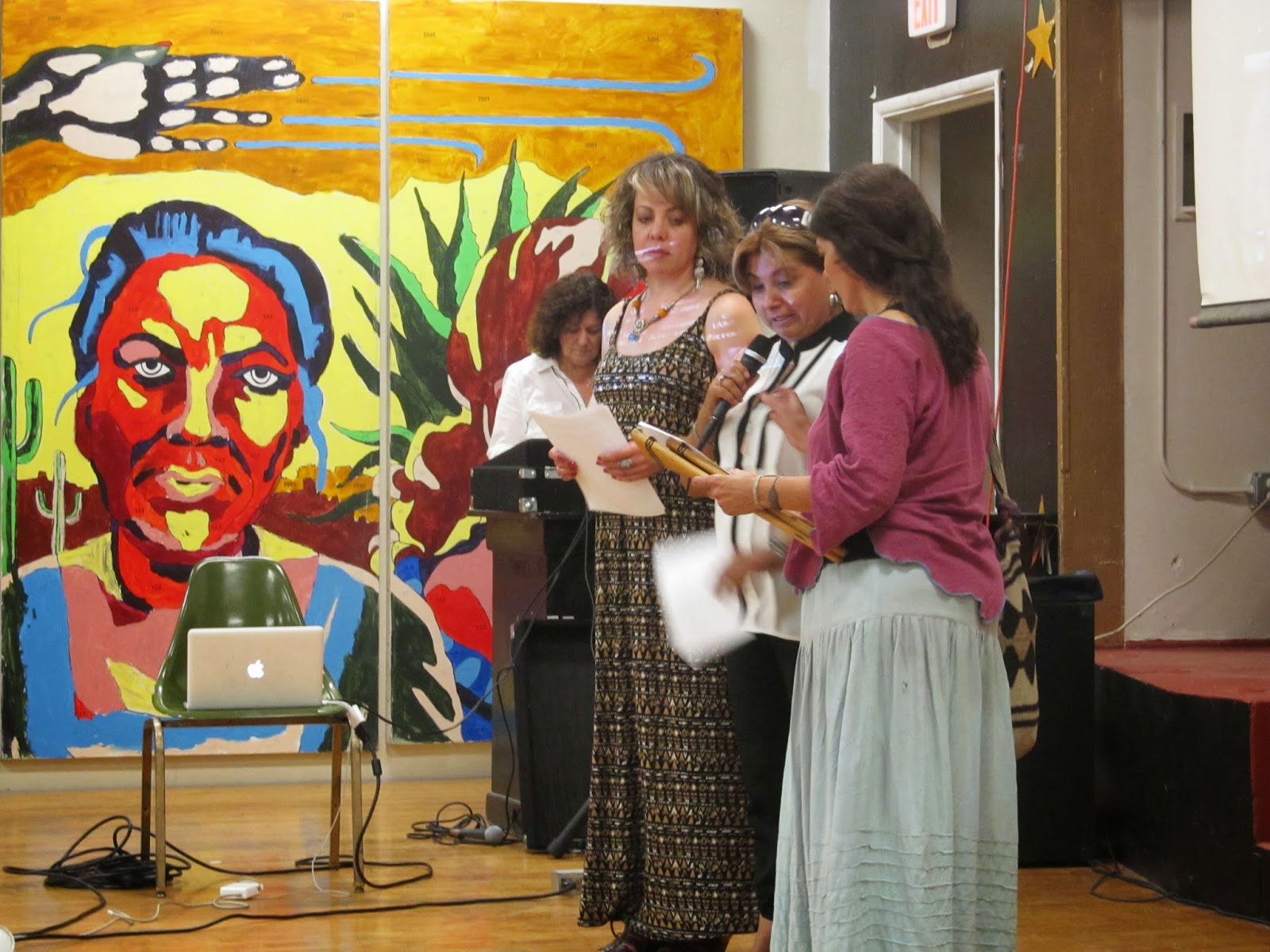 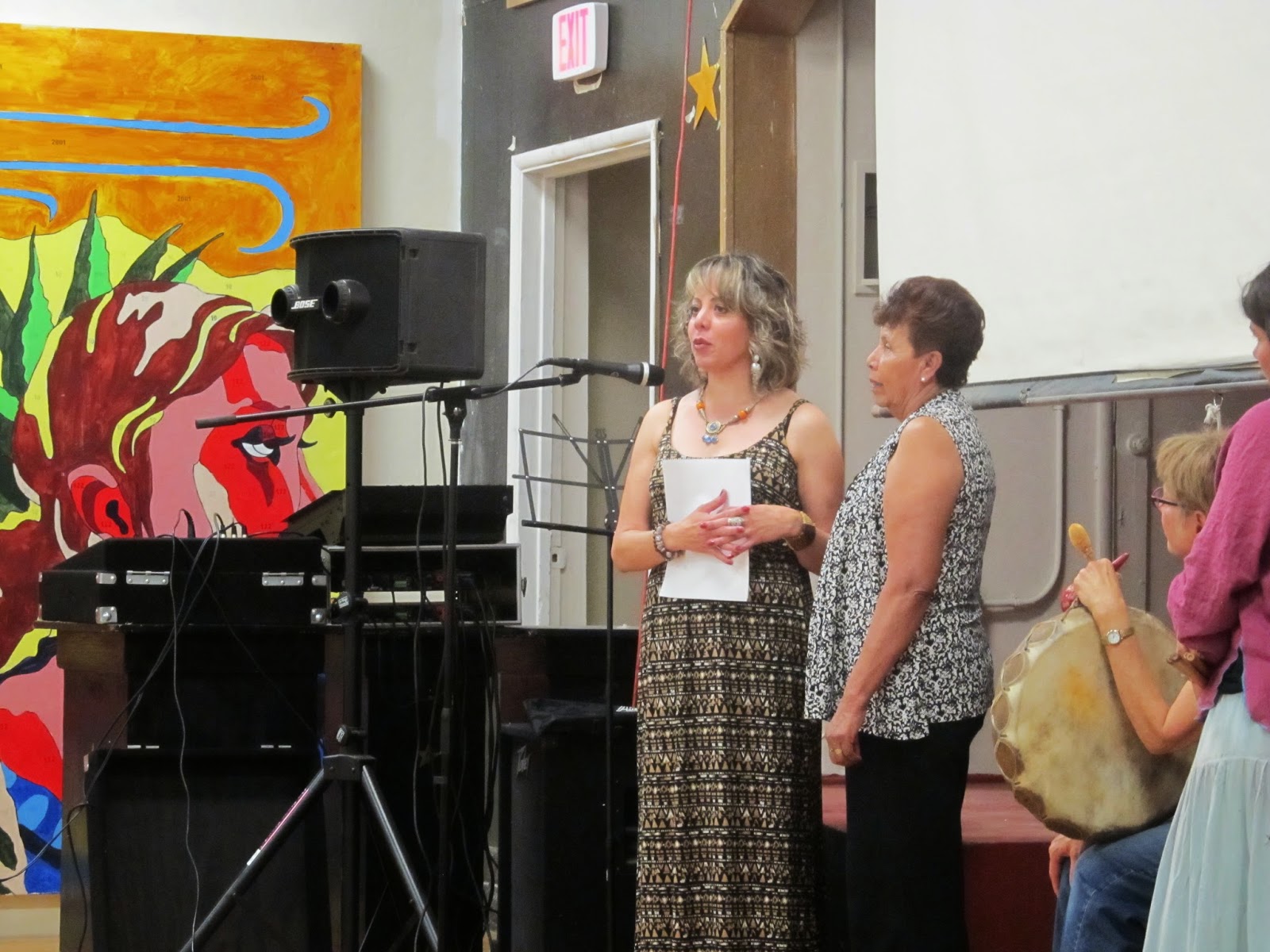 VIDEO OF THE MAY 4 EVENT WITH NEWS COVERAGE